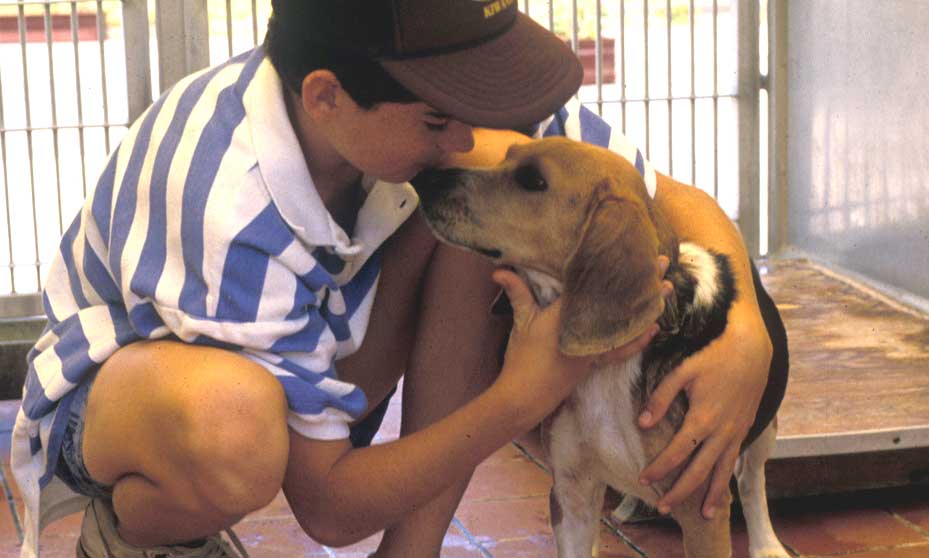 Beagle, beagles, beagles everywhere. In July of 2022, the Humane Society of the United States removed 4,000 beagles from a facility that breeds animals for research purposes. The facility had violated the Animal Welfare Act by failing to provide adequate food or veterinary care.

From there, the beagles set off to shelters all over the country, and 100 dogs ended up in San Diego County. Three humane societies accepted the dogs, including our local shelter Rancho Coastal Humane Society. Adoption screeners will undoubtedly know how naughty beagles can be and screen prospective adopters very, very carefully.

As a writer specializing in companion animals, I researched animal behavior and learned that the breed tends to have very low obedience levels and very high problem-solving abilities. They can also be surprisingly agile, as our family learned first-hand.

Soon after our son Matt entered junior high, he announced that he “needed” a beagle. His friend Brian had a beagle named Barney who was loads of fun.

“No one needs a beagle,” his dad replied. “They are notoriously naughty. Plus, we already have two dogs and so many other animals I’ve lost count.”

“I know we’ve got two dogs, but you run with Chauncey, and he likes you best,” said Matt. “And Daisy loves Mom best. I want my own dog.”

Chris just shook his head, and that ended the discussion of beagles…until a skinny, stray girl with a scar on her neck landed at the animal control shelter where I volunteered. She must have been tied up but had somehow managed to escape as beagles are known to do.

Although Chris had been adamant about a beagle-free household, I couldn’t get my mind off the sad but very friendly little girl beagle. Plus, knowing how difficult adolescence can be, I began to side with Matt, who had obviously hit a rough spot. Even more important, time was of the essence. The beagle would be held for only a few days to allow someone to claim her. No one had shown up so far, and time could literally be running out for her.

So I marshaled my arguments and carefully approached the subject with Chris, who looked at me as if I were daft. However, I steered the conversation to the fact that Matt was spending more and more time alone in his room moping when he wasn’t at school or playing baseball.

“I can understand why a dog might cheer him up,” he replied. “But adding a beagle to this menagerie is just nuts.”

Inevitably, reason be damned, I took Matt to meet her, and we brought her home. He promised that he’d be vigilant, especially at first, making sure she didn’t harass the cats or otherwise get into mischief. And he stuck to his promise, walking her several times a day and keeping her with him in his room most of the time he was at home. But, on her very first night, we got a lesson in beagle naughtiness. At dinner we’d decided to name her Bonnie. After we cleared the dishes and returned to the dining room, we found Bonnie on top of the table helping out. 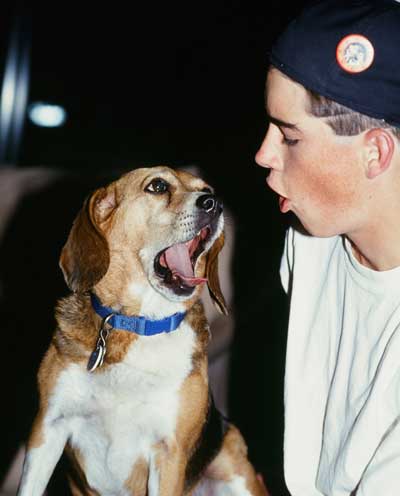 Thus began our personal education about beagle obsessions with food and following their noses (often to food). A beagle person we met later at Dog Beach opined that “you could beat a beagle with a two-by-four when it came to food, and it wouldn’t make a difference to the dog.”

Although we (and the beagle person) wouldn’t dream of using the two-by-four, we’re convinced it’s true. After a neighbor brought us some home-baked bread hot from the oven, I carefully placed it on a shelf, which curved around the top of the sink and was about five feet high and only twelve inches deep. It took Bonnie a nanosecond to smell the bread, climb on a bar stool, then the kitchen counter, and finally up to the shelf. If she’d fallen, she would have landed in the dining room, a full story below. She didn’t fall, but she did enjoy the bread.

A few weeks later, I walked into the kitchen and noticed, then smelled, what appeared to be yeast spread all over the floor. On closer inspection, the yeast seemed to have formed small balls—small moist balls.

“Oh no, not again,” I moaned, going in search of the prime suspect. I finally found Bonnie on the lawn lying next to the two-pound bag of yeast she’d dragged outside. Cleaning up with one hand, I reached for the phone with the other for a quick call to the vet and told him she looked like a beached whale.

“Bonnie will no doubt be in some distress until the yeast travels through her system,” he said, choking back laughter. “But as long as the yeast hasn’t gone bad, she’ll be fine. Surely you don’t keep rotten yeast around.”

It wasn’t surprising that Bonnie, the shortest of three dogs, ended up with the pilfered food. She obviously couldn’t have gotten the yeast off the counter, but the other two dogs probably knocked it down but then yielded to the chow hound. Not the alpha dog in general, when it came to food, Bonnie was in charge.

But Bonnie’s worst food escapade could have killed her. She somehow got into a sealed bag of Hershey’s Kisses and ate everything, including the wrappers. The minute we found the empty bag, Chris loaded her into the car and headed for the emergency vet hospital. Even a tiny piece of chocolate can kill a dog, and Bonnie had consumed a whole bunch of the stuff.

She had her stomach pumped and returned, more than a little subdued, later that night. The next morning, Matt admitted that having the smelly dog sleeping on his pillow made him feel queasy the entire night.

“We thought she was bargain at only eight bucks,” Chris replied, “but she just cost us a whole bunch of money.”