The Plight of the Easter Bunny 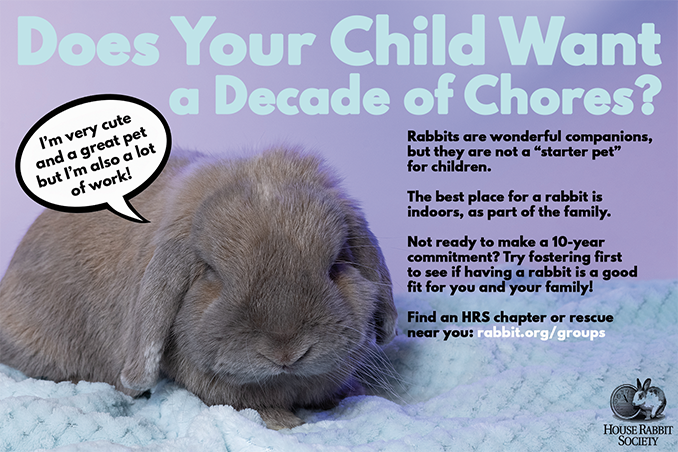 Volunteers for the national and local House Rabbit Society chapters and other rabbit rescue groups dread Easter—with good reason. Four to six weeks after Easter they find themselves awash in relinquished rabbits. And those rabbits are the lucky ones.

The majority of Easter castoffs rabbits end up in overcrowded and underfunded city and county shelters, or worse, dumped in a vacant lot or a park or a dumpster. People wrongly assume that they can fend for themselves if they have some grass to graze. They don’t consider the fact that rabbits reside at the bottom of the food chain and can fall prey to dogs, cats, coyotes, and hawks to name just a few predators or that they have unique digestive systems.

When I was freelancing for a newspaper I encountered the Easter throwaway mentality in person. I’d set up an interview and photo session with a young soccer player at his home. When the two of us went into the back yard so he could kick the ball around, I spotted a rabbit in a hutch with no food or water.

“Before we get started, let’s give the bunny some food and water,” I suggested.

“We had two rabbits, but the other one died,” he told me. “My father threw it in the trash.”

While we chatted, I conjured up a friend who was looking for a rabbit and asked the mom on my way out the door if she’d be interested in finding a home for her.

“I guess so,” said the mom. “The kids don’t pay any attention to her anymore. They did for a few weeks after we bought the two rabbits for Easter. But then they got bored.”

So I left for an interview and came home with a rabbit—to my husband Chris’ chagrin. However, I got lucky and a friend actually did adopt her.

That bunny found a permanent home, but so many other Easter rabbits don’t. The fecundity of the species exacerbates the problem. Since novices cannot correctly judge gender, people who buy two Easter bunnies often end up with a whole family just a few weeks after the holiday.  Unlike cats and dogs, females can be receptive to mating every 14 to 16 days. Their gestation period lasts around thirty days, and their numbers can multiply exponentially.

Obviously, spaying or neutering interrupts this vicious cycle, while also protecting females from their high risk of cancers (especially ovarian and uterine cancers). Spaying and neutering not only prevents litter after litter but also eliminates many bothersome behaviors like spraying and aggression including biting (with very sharp teeth). But bunnies need to be under the care of experienced exotic veterinarians and tend to be more expensive to treat than dogs and cats.

In the worst case scenario, people start with a few rabbits and end up with a multitude. Hoarding cases involving rabbits have been busted all over the country. In 2021, the Georgia House Rabbit Society helped with a hoarding case in Dekalb County. More than 150 rabbits had lived in eight filthy hutches.

The rescue group took in the rabbits, giving them immediate medical treatment, including spaying and neutering (an expensive proposition at well over $100 for each rabbit). Many suffered from abscesses from fighting, an abundance of fleas and ticks, and a scourge called coccidia (which can cause a number of maladies including weight loss, jaundice, diarrhea, and a lack of appetite).

One rabbit died suddenly and tested positive for RHDV a highly contagious and deadly virus which has been spreading across the country. The shelter had to close for more than a month to prevent the spread.

In 1988, rabbits first found their voice when the national House Rabbit Society became a non-profit organization. The group deliberately included the word house in the name. Just as dogs shouldn’t be tied up in the backyard or cats allowed to run free, rabbits don’t belong in a hutch in the backyard. They belong in the house in roomy pens with litter boxes, places to hide, and toys. Some can even have free run of the house. Their main source of food should be hay not pellets.

In San Diego, small group of concerned bunny advocates took in 11 rabbits who had been abandoned shortly after Easter. Next came Ariel, who was thrown into the ocean with her sibling, who did not survive, then a Rex female who was covered in mud and left at one of the county shelters sealed in a box. In 1997 they formed the San Diego House Rabbit Society.

Partly in response to the plight of the Easter bunny, multiple counties, cities and states have approved bans on the sale of rabbits as well as dogs and cats in pets stores. In 2013, San Diego joined Los Angeles by becoming the 32nd U.S. city to ban their sale. Instead, pet stores can only carry animals from local shelters, humane societies or non-profit rescue groups. In 2019 California first state follow their examples. Maryland and Vancouver, Canada have followed suit, as well dozens of municipalities.

With proper care, rabbits can live for eight to 12 years, sometimes even longer. That life span should be taken into account, as should the issue of primary caregiver. We know first-hand that most children will promise the moon and deliver next to nothing over time. But they do learn about responsible behavior by watching their parents follow through with the care of companion animals—just as they get the wrong message by watching their parents throw a rabbit in the trash.